For decades, a larger version of the photograph of First Lady Eleanor Roosevelt, shown in the far left section of the Funk Legacy Gallery, hung in the office of my father, Rabbi Julius Funk, Executive Director of Rutgers Hillel from 1943 to 1982.

Of course, students and guests of Rutgers Hillel visiting him in his office would frequently inquire as to how he happened to appear in a photograph with Mrs. Roosevelt. I imagine he shared a quick summary of the story, but no doubt some students wanted to hear more. At some point over the years, my father determined that the full story should be a “secret“ that would only be shared with graduating seniors who had been active in Hillel during their student years. To that end, each year my parents hosted a group of 30 or more young men and women at their home in Highland Park shortly before graduation to share the Eleanor Roosevelt story with them. All attendees were sworn to secrecy (even if they were then dating a curious underclassman!).

As a youngster, I used to listen to the story from the upstairs hallway near my bedroom, peering through the banister rails to try and see down into the living room to the assembled rapt audience. (My older brothers tell me they used to do the same!) My father would be seated in a chair in one corner, regaling the students with his story, and my mother, who was usually busy preparing a spread of desserts for the students in the kitchen, would pop in occasionally to augment – or correct – my father’s tale.

It has come to my attention that in recent years, students and guests admiring the Funk Legacy Gallery have wondered about the photo, and that several theories about it have circulated. From what I’ve been told, they are all quite inaccurate. Accordingly, I felt it prudent to compose this recounting in order to memorialize the true story as best as I can remember it….

When my father and mother moved to New Brunswick in 1943, just a year after they were married in Brooklyn, there was no Hillel in existence at Rutgers University. With the help of some University officials, my father was able to assemble the names of some Jewish students, and began calling them in their dorms to try and drum up interest in this new organization that he was establishing at Rutgers. In due course, a group of students met with my father on campus to begin planning some basic religious and social activities for the Jewish students at Rutgers University. 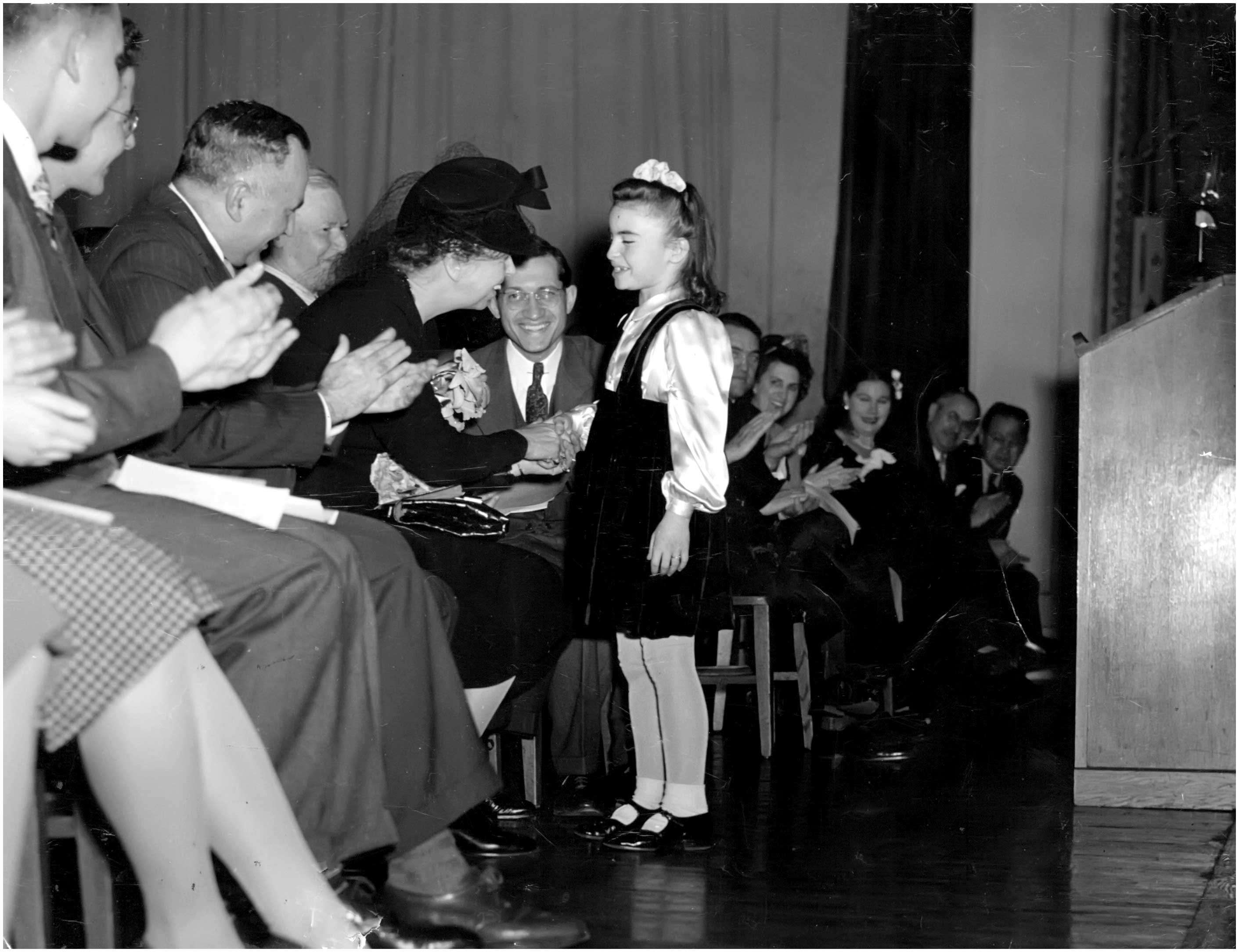 At one of these early meetings, one such student, named David Keller, kept bringing up the idea that a good way to publicize the existence of this new organization would be to sponsor a large event that would ensure a lot of publicity. While the other students were considering a dance at the student center or a Friday night Shabbat service as a means of drawing people to Hillel, David persisted with the big ideas. He even suggested inviting Eleanor Roosevelt, then First Lady of the United States, to the Rutgers campus to support a war bond rally, something that he felt would be enticing to her. This idea seemed ludicrous to my father and the other students, but my father told David to go ahead and write to Mrs. Roosevelt and see what he could set up, assuming that any letter from this college kid would be quickly dismissed by the very busy and prominent First Lady.

Amazingly, just a couple of weeks later, Mrs. Roosevelt’s secretary did reply to David‘s inquiry. The letter expounded on how busy Mrs. Roosevelt was, how she couldn’t possibly undertake any more commitments even to another war bond rally, and so on. But at the very end of the letter, the secretary asked, “…but if Mrs. Roosevelt did want to come to New Brunswick, how best would she get there?“…or something to that effect.

David showed the letter to my father, and despite the negative tone of most of the letter, they followed up with Mrs. Roosevelt’s secretary to see if a meeting could be set up at Mrs. Roosevelt’s apartment in New York City to discuss the possibility of a visit to the Rutgers campus. A meeting was promptly set, and a few students, including David, joined my father one morning to head to Mrs. Roosevelt’s apartment on New York’s Upper West Side to meet with her. When they arrived, a maid ushered them into a sitting area, where they sat and waited patiently for Mrs. Roosevelt. They waited and they waited. Finally, they heard the toilet flush in the distance, and looked at each other with the same surprised expression as if to say, “even Mrs. Roosevelt….“ (This was my favorite punchline I would listen for when I was a child eavesdropping on the annual story.)

My father described Mrs. Roosevelt as gracious in the extreme and very interested in learning about Rutgers Hillel, the students who came to meet with her, and this proposal for a war bond rally. Mrs. Roosevelt ultimately agreed to attend if a convenient date could be established.

My father returned to New Brunswick by train on his own, leaving the students in New York to spend the day playing tourists. He recounted that the enormity of what he had just undertaken really hit him then; he was completely overwhelmed by the prospect of planning and holding a war bond rally that would need to draw hundreds of people in order to justify the presence of the First Lady of the land. This they did not teach in Rabbinical School!

My father had made some small inroads with leaders of the Jewish community in Middlesex County and with University administrators, but he was not a particularly well-known quantity at that point. However, once he started reaching out to different organizations to see if they would participate in the financial and logistical components of this major undertaking, he and Rutgers Hillel became firmly established as part of both the University and local Jewish communities. Although surely some people didn’t believe anything my father was telling them at first, others were very eager to jump on the bandwagon; as he told the story, some folks even tried to take over control of the event for their own benefit. In the end, my father had to accommodate many local and statewide politicians and other dignitaries who wanted to speak at or otherwise participate in this event with Mrs. Roosevelt, or at minimum be seated on the dais with her. For weeks, my father and mother worked very hard with the student committee and with community leaders to plan and execute the war bond rally, which was held in January of 1944; over 1,200 people attended the war bond rally, which raised over $1.5 million for our country.

It was an exhausting experience for my parents, but no one in the community could thereafter say they did not know about the existence of Rutgers Hillel and its new, young Director, Rabbi Julius Funk.

In the ensuing years, my parents built upon those newly-formed connections and relationships to establish a very vibrant Rutgers Hillel community, which continued to grow throughout their 39 years on campus. Even after they retired in 1982, they maintained a close relationship with the organization, and established the Rutgers Hillel Alumni Association, which has provided an opportunity for alumni to stay in contact, attend social events, and support the organization.

* Jonathan Funk is the youngest of Rabbi and Pearl Funk‘s three sons, all of whom attended Rutgers and were involved in Hillel activities. Jonathan would like to acknowledge the helpful input of various other “Funk Alumni“ who augmented his own memories of the “Eleanor Roosevelt Story“. Special acknowledgment goes to Ross Cooper, R’77, who suggested the idea of putting this story to paper while chatting with Jonathan in front of the Rabbi Julius and Pearl Funk Legacy Gallery during a Funk Alumni reunion in August 2018.